I made the 96 sq ft mainsail for my AF3  from a Sailrite kit.  I gave them the dimensions and draft and asked them to put in two reefs even though only one is specified on the plans.  The second reef reduces the sail to about 49 sq ft.   Even with two reefs she is overpowered at anything above 25 mph.


An AF3 weighs 250 to 350 lb and has a 4' beam which is a bit narrower than other boats her size so her sail area has more of an impact on stability.  I am considering sewing a third row of reef points to get the sail down to 31 sq ft so that I can sail upwind more comfortably when the wind kicks up.

I don't want to spend a whole weekend sewing just to find out the boat won't point so I've done some searching on the web, some asking around (the watertribe forum was very helpful) and some calculating.

Will a third reef result in too little sail?
Adding a third reef will reduce sail from 96 sq ft to 31.5 sq ft.  Is that enough sail to make headway in 30 mph winds?  The force exerted by a sail is proportional to the square of the wind velocity.  Jim Michalak has given a simple formula:

where V is in Knots and C is a constant representing sail efficiency from 1 to 2.  My mainsail has good draft and a nice shape, so I'm calling it a C=1.5.  Since I like to measure speeds in miles per hour, I applied an additional conversion and came up with the following table for my mainsail:

I admit that this computation is pretty loose: it assumes the hull acts like a very poor sail (C = .5) and the area exposed to the wind is about 3' x 8' (because the boat is presenting about 50% of itself to the wind).  The table predicts that at 30 mph, the wind exerts 32 lbs force on the hull.  At that same wind velocity, the triple reefed sail will exert 126 lbs force, so the math is still looking OK.

Will there be too much lee helm?
I am also concerned about lee helm, an unsafe situation in high winds. Without any reefs, the centroid of the sail is even with the trailing edge of the leeboard.  With two reefs in, the centroid is 13" farther forward (see picture below).  I would have expected to experience lee helm with the second reef in, but instead I get significant weather helm, especially during gusts above 25 mph.  I have no idea why this happens, but I can think of a couple of possibilities:
A third reef will move the centroid forward 19" (as opposed to 13" with two reefs).  So my tentative conclusion is - I'm hoping I'll get lucky and it won't cause lee helm. 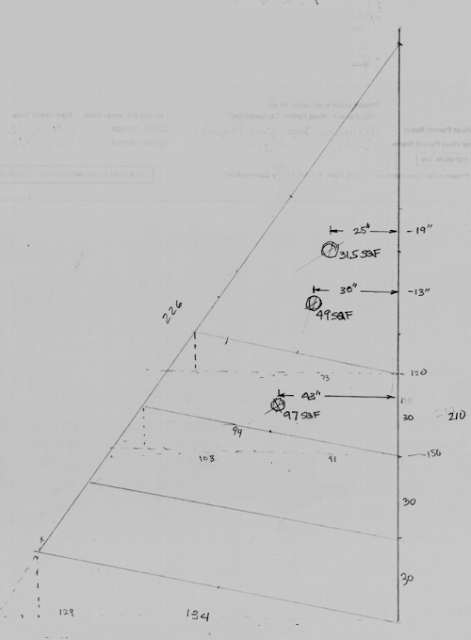