A Sharpie in Core Sound - Part 2


In March, our kids were scheduled to go on a week long service trip.  Julie and I haven't been on an extended vacation on our own in a very long time, so we planned to go camping or dinghy cruising somewhere in the south, weather depending.  I wrote about our preparations in Part 1.  In February we had selected a few possible destinations including the Everglades, North Carolina and Virginia.  As we approached our March 23 departure date, the weather was looking promising in the Core Sound of North Carolina's outer banks so off we went.

I contacted Steve Earley, whose blog has a lot of great information about dinghy cruising in the area.  He recommended charts to use and possible launching sites.  On March 23, we drove from Coatesville, PA to Harkers Island, NC, stopping on the way to pick up a Suzuki 2.5 HP engine at Eds Marine Superstore in Ashland, VA.

Our little sailboat looked totally out of place in the parking lot faced off against dozens of high end bass boats and sport fishing rigs.

When we got to Harkers Island, we checked in to the Harkers Island Fishing Center, a boat storage warehouse, marina and no frills hotel right on the water.  The marina and boat storage business was still closed for the season, but the motel was open.  The rooms have painted cinder block walls and linoleum floors, but you can see the boat ramp from the window and they are very friendly people.  The whole place was pretty empty and this characterized our whole time in NC.  We were lucky to have good weather before everyone else arrived.  We were told that last year in March, the weather was freezing, wet and stormy.  During our trip we had lots of wind and a little bit of rain but the temperatures never got below 44 degrees at night or 58 during the day and most of the time we had afternoons in the 70's.

The forecast for the next two days called for high SE winds, thunder and lightning so we decided to wait to begin our trip, instead visiting the maritime museum in Beaufort and doing other touristy things.  On Sunday, there was a weather window between storm systems so we took the opportunity and at about 11:00 am we departed with a 15-20 mph south easterly.
We sailed downwind for three or four hours with two reefs tied in, often in less that 12" of water.  The boat draws only 6" so we were able to ignore lots of navigational aides and even sailed across some shoals at low tide.  All of my modifications to Cream Cheese worked like a charm.

More storms were predicted for the evening so we stopped early at the ruins of an abandoned hunt club.  Distance 16 miles.  This was a nice place to stop because it has an access road through the marshes linking the sound to the ocean beaches. 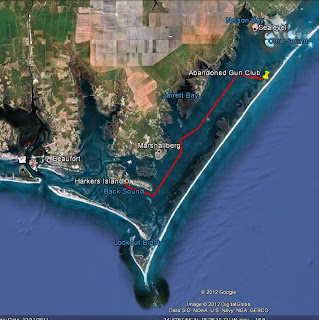 As evening approached, we unstowed our gear and relaxed under the bimini and a small tarp.  We took a long walk on the deserted atlantic side bach and made some dinner.  For this trip, we brought a bunch of ready made indian food and rice dishes in sealed pouches.  These meals were very easy to prepare and clean up and they tasted pretty good!


Before going to bed, we tied on a more complete tarp to act as a tent.  The tide went out, leaving the boat dry on the beach.  We were awoken at about 10:30 pm by a racoon scratching around in the cockpit trying to get into our food bin.  He wore a collar with a big yellow tag with the number 139 in large print.  I looked at 139, he looked at me.  I shone my flashlight at him, he looked at me.  He wasn't afraid.  I yelled at him for a while and he finally stauntered away.   He came back one more time and hopped in through the oar port, but I shooed him away again.  After that, the storm system came in and we didn't see 139 again.  We had a very wet and windy night at anchor, but the cabin stayed dry.  A wind shift from SE to NW meant adjusting the anchor arrangement twice (I had two anchors rigged).  For a while there were 30+ mph winds from the East, blowing right into the anchorage, but Cream Cheese did fine and we slept well in between anchor adjustments.

We decided to stay another day and had several great walks on the seaward side of the island. There were miles and miles of empty shore with nothing but terns, gannets, gulls, black skimmers, sand pipers, plovers, pelicans, cormorants.  We had a beautiful evening with N winds at 10 mph.

On the third day, my back was hurting so despite a favorable northerly wind 15 to 20 mph that would have taken us to interesting anchorages at Shackelford Island, we took it easy and relaxed while I could recuperate.

After the first rough night, we had nothing but comfortable and pleasant sleeps.  The tarp tent, aside from being, ugly, awkward to set up and a bit noisy, worked out very well and I am eager to fashion a real fitted tent out of good materials.  During our stay at this anchorage, we only saw two people (from a distance) and three or four boats.