A Sharpie in Core Sound - Part 4

After spending 3 days on the barrier island called South Core Banks, we were ready to head southward.  Unfortunately, the favorable NE wind from the day before had turned into a strong SW with a forecast for 20 mph winds, gusting to 30.  We took one more long walk on the beach, packed up and stowed our stuff, got into our foul weather gear and headed out.

After bumping a few times in the shallows near the duck blinds, we made it into the channel and started slogging our way upwind.  We had some vague hope of possibly making it to Shackelford Banks with the help of a favorable wind shift, but after four hours of pounding into the steep chop, we turned around and headed back north, intending to anchor in Oyster Creek, just north of Davis.  I was very proud of how well Cream Cheese had done, but we we weren't racing and Oyster Creek seemed like a nice place to investigate.

On our way, we beached the boat at the Davis Ferry terminal and took a walk around, stopping at a little tourist shop to wash up and have some coffee.

Back to the small beach near the ferry terminal we lowered the mast and lashed it on deck.  The entrance to Oyster Creek is spanned by a 10' clearance highway bridge, so we knew we would have to lower the mast sometime.  We powered out into the channel, made our way to the mouth of the creek (sometimes surfing with the breaking waves) and scooted under the bridge.  The water in Oyster Creek is 1 to 2 ft but we were near high tide so we followed crab pots deep into the creek and nosed into the bank of a levee.  On the windward side of the levee, the wind was howling and on the leeward side the waves were frothing up just yards from our stern, but it was snug and calm in the wind shadow of the levee.


The shores of the Core Sound are carved up by hundreds of uniform, straight canals.  In Louisiana, we call canals like these trenasse and they are usually cut by duck hunters or oil companies.  There were a number of trenasse near the levee.  The levee encloses an irregular pond of about one square mile that borders the creek.  The canals are cut outside of this area except where they seem to pierce it (below).  I would love to know more about these structures and their purpose.  Perhaps the pond is/was some sort of fish farm?  Maybe the canals are for flood control, but if so, why does their shape pierce the pond?  Are there submerged pipes?  Maybe the pond was built after the canals and the small bunches of grass (dots on the picture) are just left over spoil? No one I asked could tell me.

After setting up our tent, we took a long walk on the levee road, had a quiet meal and settled down for the night.  All week we had been reading aloud to each other the book Persuasion, by Jane Austin and this night we finally finished it.  (Spoiler alert) The heroine marries well, and all difficulties are resolved.

After being boarded on the first night by Racoon 139, I decided it would be best to move the boat away from the bank a bit, so I used the second anchor to draw is into the canal a bit.

The next morning, we got up early to beat the low tide but almost missed our window.  We just barely got out of there by sliding Cream Cheese along the mud and polling with our oars.  After passing back under the highway bridge, we stopped at a well maintained boat ramp to raise the mast, make tea and have breakfast.


Our plan for the day was to return to Harkers Island Fishing Center so that we could drive home to Pennsylvania the next day.  We had a lovely sail in much more variable wind conditions.  We started the day with one reef but added a second reef a few hours later.  Then the wind dropped to almost nothing so we shook out both reefs.  Later the wind picked up to 15 mph and shifted to the south so we went back to two reefs on an upwind beat, still very comfortable.  Each time we reefed, it took 10 to 15  minutes to get going again and we usually lost a lot of headway as we drifted downwind.  Much of the time was spent dealing with the snotter, downhaul and lacing.  I've got plans to change things to make reefs go faster. 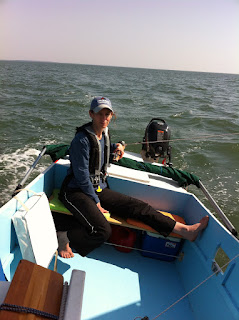 At around 4:00pm, we sailed into the marina, retrieved and cleaned the boat and took long hot showers.

That evening, we visited with John, a retired relative of the marina owner.  He helps out with the business and lives in his fifth wheel RV which he keeps parked right at the edge of the shore overlooking the sound.  It was a fun time - learning about his life growing up on Harkers Island and his life in the oil business.  If we return to the area, we will try to get in touch with him again.

The next morning on our way home we stopped at B and B Yacht Designs to talk to Grahame Byrnes about his small boat designs.  We had a fun and interesting visit with Grahame.  He gave us a tour of a big power catamaran that he is building (around 40 ft) and we saw his Core Sound 20 and his Everglades Challenge 22, Southern Skimmer.  He demonstrated his precision cut panel kits and showed us the drawings for a new update to the CS 20 with cuddy, self draining cockpit and water ballast.  He later sent me an email indicating that work on hull #1 is already in progress.  I'm seriously thinking about building this boat.

It was an awesome trip.  The boat did well under challenging conditions.  We had lots of adventures yet plenty of time to relax and when we arrived back home we were tired and happy.

Posted by Frank San Miguel at 7:20 AM