In the summer of 2010, I repaired the transom on Peanut Butter, our 18' Cabin Clam Skiff, designed by Phil Bolger and Friends. The floor of the motor well had gotten some "checks" in the plywood, resulting in water collecting against the transom. Once the transom was in ship shape condition, I decided that instead of putting a permanent cover in motor well, I would add a self  draining hatch so that I can inspect the transom as needed.
Here is the motor well before adding a hatch.  Note the ragged edges where I cut out the original plywood panel. 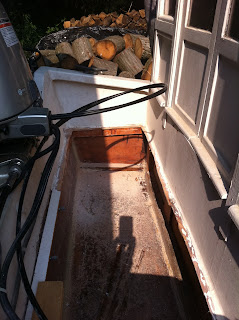 Here is the hatch coaming coming together.  I made this out of a piece clear redwood that was left over from the fabrication of the mast of Cream Cheese, ten years and three moves ago. 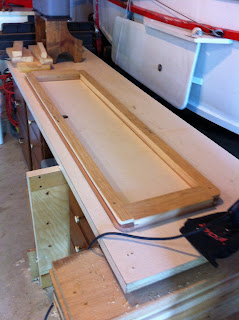 Here I have dry fitted the coaming in place. 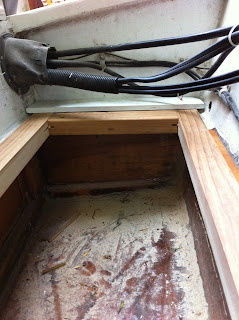 Fitting a channeled frame into an already existing hole can be difficult you don't have room to assemble the pieces.  For this reason I felt a biscuit jointer would give the best strength rather because a mortise and tennon wasn't possible and a rabbet joint would not be as strong. 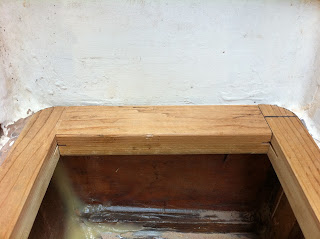 After a few coats of epoxy, primer and paint the hatch is ready to be installed. 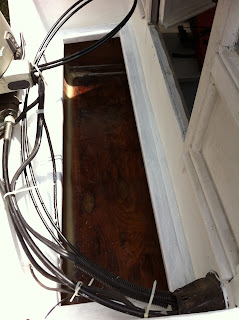 As a reward we took a leisurely 20 mile ride down the Susquehanna just north of the Connowingo Dam.  Here we are at anchor just downstream of the cooling ponds of Peach Bottom nuclear power plant.  According to my Garmin fish finder, the water is ten degrees warmer here than a few miles upstream. 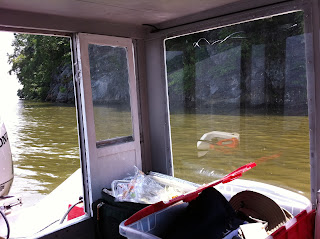