After recently spending a week in the unpredictable weather of the Core Sound of North Carolina's outer banks I've been thinking a lot about reefing.  Here is an updated version of an article I wrote for Duckworks Magazine 12 years ago.  If you've read it before, most of my updates are near the end. 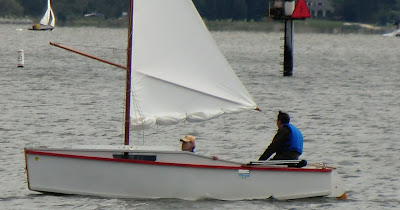 I've sailed small boats all of my life, but it was a long time before I started to think of reefing as an every day sail handling skill rather than an emergency tactic. When I finally did start setting my sails to match the wind conditions, it came as a revelation that heavy weather sailing doesn't have to involve acrobatic hiking on the windward rail or raw hands from gripping the sheet. In fact, I discovered that with good sail management, heavy weather sailing can be fun, fast and safe.

Of all the small boats I've sailed, my two favorites are:
Drascombe Longboat - A very seaworthy 21' open boat (doesn't point well). When my dad first got her, we didn't take advantage of the features of the sail plan and so we wound up hiking and heeling and burning our hands holding onto the sheets. I borrowed the boat from my dad for about 13 years and it was during this period that I really learned how to match the boat to the wind. I've done some silly things with this boat and sailed in some terrible weather in the Gulf of Mexico and the Chesapeake, but she has always brought me home, largely because of her sail rig. Side note: this boat is ample proof that an open, unballasted boat can be very seaworthy.

AF3 - an able little 16' sharpie skiff with a cuddy cabin designed by Jim Michalak (My current Boat). It has one sail with two rows of reef points. It took me about 170 hours to build the boat and sew the sail. We've had her out in 20 to 30 mph winds and had a wonderful time with no worries. On one windy trip in Nebraska with steady 25 mph winds, we had one reef tied in the whole time, sailing beam reaches or broad reaches. We would have had to tie a second reef in if we had needed to head upwind. It was nice to know we could get home even if the wind shifted.

Why reef:
Jim Michalak has mentioned in his excellent essays that force on a sail is proportional to the square of the wind velocity. If the wind doubles from 5 to 10 knots, the force on the sail will increase by four times. This is the reason why reefing is so important. I found a description of a Scotland "Fifie" in John Leather's "Spritsails and Lugsails." It was used for fishing along the North Sea coast of Scotland around 1905 and had eight lines of reef points on the main and five on the mizzen. 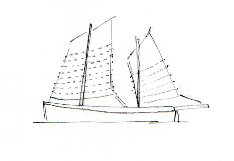 Other similar craft carried complete sets of smaller heavy weather sails for the same purpose. Howard Chapelle, in his "American Small Sailing Craft," describes how oyster and crabbing sharpies carried two masts with three mast steps. In light winds, both masts were stepped fore and aft. In heavier winds, a single mast was stepped in the middle mast step. Bluewater cruising literature is full of heavy weather sail handling information that, while not aimed at the small boater, is still relevant. For instance, cruisers seem to prefer cutters and ketches because their sail shortening options are better than with other rigs.

There are as many different reefing schemes as there are sail plans. To my mind, there are two important measures of a reefing system:

1) Does it work when you really need it to work.
It seems to me every other emergency at sea story involves some sort of problem with reefing - either the furling drum has jammed, or sail doesn't come down etc. For this reason, I consider reliability more important than convenience when it comes to reefing. In the engineering world, "Mean Time Between Failure" is used as one measure of reliability. I would love to know the average MTBF for roller furling jibs at any given marina in the US. I bet it is a terribly low number. Among blue water cruisers, whose life depends on such gear, I am sure the number is much better.

In most aspects of sailing, and particularly in reefing, the probability of failure is highest at the moment where the consequences are the worst (unlike my car, where the probability of failure is greatest when I go to start it). Generally, mechanical systems with fewer parts are more reliable than systems with more parts, so my personal bias is toward simple reefing systems. Complex systems can be reliable, but they are more expensive than simple systems and usually require more recurring attention in order to achieve that reliability. This is one reason why I like the old fashioned rigs like the sprit-boom and the loose footed main.

2) Does the boat sail well when reefed.
I think a rig that is unbalanced or can't point under reefed sails is not much better than one with no reefing options. The whole point of reefing is to manage the boat so that you can get to where you are going in various wind conditions. Besides being inconvenient, sailing an unbalanced boat in heavy weather is unsafe.

When to reef:
The saying goes: "reef early and reef often." I find that above 10 knots, I adjust my sail area for every 5 knot increase in wind, depending on point of sail. A small boat, especially an unballasted one, is more sensitive to sail area when going upwind, so I am more likely to reef if I have any upwind work ahead. I also think it is crucial to be able to reef while underway, even in a small boat. This may not be important for someone who will always be sailing within site of the dock, but I like exploring and going from place to place, so I need to know that I can get back home, even if the wind changes or picks up.

How I reef:
"Swallows and Amazons," by Arthur Ransome talks about reefing: Mum quizzes her sons John and Roger on reefing the lugsail of the Swallow. Roger explains that you first tie the pendant nearest to the mast, then the one at the end of the boom, followed by the reef points in between. So far, after 26 years, that has been my only instruction!

The Drascombe Longboat, which Phil Bolger would call a Jib Headed Gunter Yawl (see his book "103 sailing rigs, straight talk") has a roller furling jib, a loose footed main with two sets of reef points and a small balancing mizzen aft of the tiller. When reefing the main, I always lower the main completely. She is very well balanced under jib and mizzen alone, so if I have a crew, we keep going underway while reefing. If I am single handing, then I heave-to, drop the sail, free the mainsheet, free the downhaul and clip it to the first reef tack tie the reef points, clip the mainsheet to the reef clew, then raise the sail and continue on (I have stainless carbiner clips on both the mainsheet and the downhaul to make reefing easier). 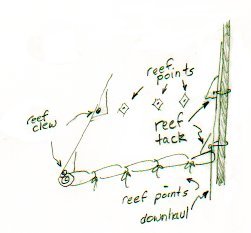 Reefing parts of a sail

To heave-to, I back-wind the jib (sheet it in on the windward side), let the main sail fly loose or lower it, haul in the mizzen and put the tiller hard to lee. The result of all this is that the boat very gently drifts to leeward, keeping her bow about 30 or 40 degrees to the wind.

Heaving-to in the drascombe

As the wind increases my order of sail shortening usually goes like this:


Sometimes I heave-to to wait out squalls instead of running with the wind or heading in to shelter.


My AF3 is a cat rigged sprit-boomed sharpie skiff. Chapelle indicates that early sharpies of the 1870's had vertical reefing, the sail being drawn up to the mast with brails. Later boats used horizontal reef points. Jim Michalak has tried vertical reefing on his sails, but was unhappy with the results. I put horizontal reefs into my AF3 sail and so far, they have worked out very well. Some people do not rig a halyard on this type of rig. They simply leave the sail tied to the mast and roll it up when not in use. I have a halyard. On some sharpie designs, owners reef by removing the sprit boom and roll the main around the mast. I haven't tried this on the AF3 but I suspect the upwind sail performance would suffer greatly because the absence of the sprit boom would ruin the sail shape. Since there is only one sail, there is no possibility of heaving-to or staying underway while reefing. There is, however a very nice cuddy cabin that gives the sail plenty of protection from the wind while I am tying the reef points. 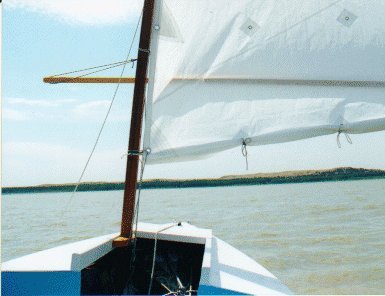 AF3 mainsail with one reef tied in

To reef, I lower the sail completely, remove the sprit boom, free the downhaul and re-lace it to the first reef tack. Then I the tie the reef points starting with the one farthest from the ends going inward, refasten the sprit boom and raise the sail. I haven't had boat for very long, so I don't have much practice, but so far the whole operation takes five to ten minutes - about two to three times as long as on the Drascombe.  The main reasons are:
I have some ideas about improving the reefing time, but I think that reefing my AF3 will never be as easy as on the Drascombe.  Graham Byrnes, designer of the Core Sound 20, which has cat-ketch sharpie sprit rig, told me that he can reef both sails in a few minutes.

The Core Sound 20, Dawn Patrol, with one reef tied in

He attributed the ease of reefing to the inherent qualities of the cat-ketch configuration (similar to the Drascombe, the mizzen keeps things stable while you rig the main) and the fact that he uses sail track instead of lacing.

Conclusion
I think the ability to effectively manage sail area, regardless of rig type, is a fundamental part of sailing and seamanship. For small boats, sail rigs with few moving parts and simple reefing schemes are safe, efficient and reliable.

Posted by Frank San Miguel at 8:51 AM